Trente Pas Entre Terre et Ciel (version Musicale) is an extremely long hopscotch, designed to be played by multiple pairs of players at once.  In a numbered sequence of squares, each consecutive section changes the rules slightly, leading players through new challenges together.

As players move and hop, a series of overhead sensors triggers an interactive musical composition, and spoken instructions.  The music was composed and performed by virtuoso Theremin player Pamelia Stickney.  Experienced together, the instructions underfoot and the music overhead send players on a collaborative journey of play and motion.

Press:
Toronto Star: Digiplayspace back to make you jump, and more, at Bell Lightbox

THE DANCINGULARITY is an audience-interactive dancegasm induction machine created and controlled by KOKOROMI.

On September 21, 2012, THE DANCINGULARITY debuted at the Highball in Austin, TX as part of Fantastic Arcade. This video is cut from footage taken by Bobby Arlauskas.

More information about THE DANCINGULARITY from Kokoromi, and on Venus Patrol 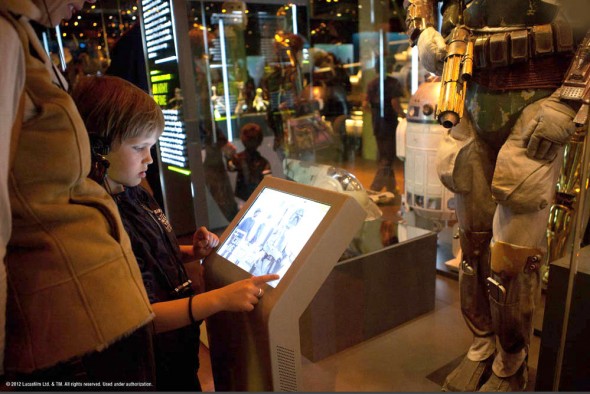 I contributed interaction, writing, and game design for the engaging visitor experience of Star Wars Identities: The Exhibition, working with exhibition development firm gsmprjctÂ°. GSM are one of the Montreal companies forming the X3 Productions exhibition creation group, who launched a much-lauded Indiana Jones and the Adventure of Archaeology exhibit in 2011.

Star Wars: Identities explores the formation of human social and psychological identity through the lens of the familiar Star Wars characters and worlds. Upon entering the exhibit, each visitor is greeted by Yoda and given an RFID wristband which allows them to interact with game stations throughout the space and save their choices. Then the visitors are each sent on a “Quest” – to discover who they are in the Star Wars universe, by creating a unique character in that world.

Each station explains and reveals the core components of human identity such as place of origin, family style, mentors, careers, and personal values. A visitor can touch her RFID bracelet to the display to choose the aspects that she would like her Star Wars identity to have. In the end, each visitor must each make the ultimate choice – will he follow the path of good, or join Lord Vader on the Dark Side? Finally, visitors can see their created character projected in the space, created from any one of over 50 million possible identity combinations.

This story on WatchMojo gives an explanatory overview of the interactive experience.

An immersive interaction prototype created at Art && Code 3D to explore the potential for physical interaction with digital interfaces from a non-upright body position (such as sitting, lying, reclining, floating, etc).

Working with students and staff at Carnegie Mellon, I prototyped this wood-framed tent which performs as a full-body touchscreen. The software system currently supports up to four points of contact from participants lying down inside. Thus it could be used by multiple visitors, or more to the point, multiple limbs.